This is a photo opt of the president and all of his King Pins signing the 2 trillion dollar relief bill for the victims of the Coronavirus.

What’s missing from this photo? Not a single member of the Democratic leadership was invited for the photo signing. Yet it is Trump who blames the Democrats for lack of partisanship with his administration.

One would think in a time of crisis in this country our fearless leader would try to unite this country instead of pulling us apart.

Not only did he ignore the Democrats he mentioned the only way states would receive aid was , “they must be good to me.”

What the Hell do we have here; a man willing to allow Americans to die because the governor of a state was “not good to him?”

What does it take for Trump followers to understand this is a “what’s in it for me” president. Those who friend him get the bonus, those who oppose his weak ideas, get punished. Is this the new American way

The other day, again with Americans dying for lack of health equipment, he bitches about the price of ventilators.  Here with a man who has a record $2 trillion dollar deficit. Go figure.

We now hold the record for the most cases of the virus, mainly because Trump sat on his but and denied the virus existed. He was smarter than the world scientists even his own stating when warmer weather came the virus would disappear.

Explain that logic to those who died in insolation whose families never had the chance to say goodbye to their loved ones.

I couldn’t believe the photo of the number of cars lined up in the parking lot at Dover Downs yesterday to pick up free food distributed by volunteers. The parking lot was filled bumper to bumper rows and rows wide.

I also can’t believe that many people couldn’t find or afford food needed to survive during this medical crisis. Many in those lines are scammers taking advantage of good people wanting to help.

I have heard over the years for Christmas and other chairitable 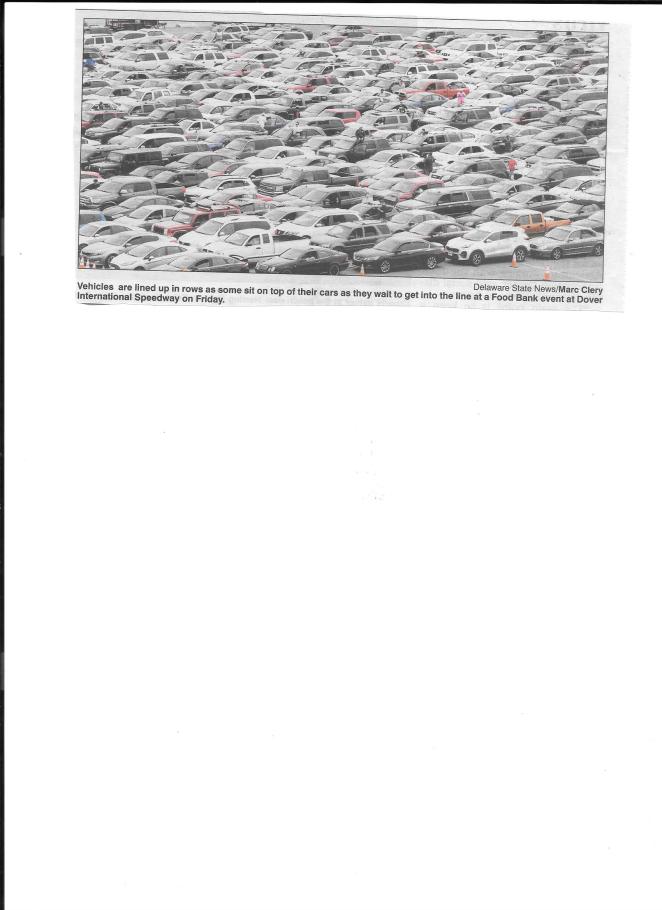 groups a lot of people travel from place to place to pick up free items. Many who are in dire need of help, are either too proud to ask or don’t have transportation to pick up these goods.

These people who abuse the system should be ashamed of their tactics and also ashamed they may be causing some needed families of getting food.